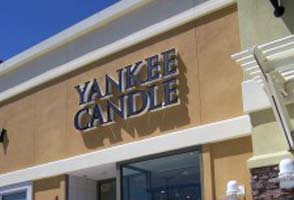 I never really gave it much though until one summer when we were getting an extra ordinary amount of calls from retail stores like this one. Yankee Candle is located in the Summit Sierra Mall (Sierra Window Tinting has tinted just about everything [except the Apple Store >:-( ] in Summit Sierra) and they sell, hey wadda ya know, they sell candles!

The problem they were having was their inventory (that would be candles) were melting on the shelves! You’d think the simple solution to this would be to “crank up” the A/C and cool the ambient temperature down but things are a little more complex than that.

Here’s what is causing the problem… Solar Energy is divided into three main parts, Visible Light, Infra Red, and Ultra Violet. All three of these em spectrum regions contribute to heat. In this case, it is the short wavelength “near infra red” transmitting through the store front windows and subsequently being absorbed by the candles which then in turn gets converted to heat. The heat warms up the candle and well um… you can guess what happens next.

So the solution here is not to reduce solar energy by putting a dark reflective ugly film on the glass, then how will customers see what is inside the store? What need to be done is to apply a film that filters as much of the infrared energy out as possible while at the same time allowing plenty of visible light so that customers can see the displays in the store windows.

Sierra Window Tinting carries spectrally select smart window films from Hüper Optik and Vista. Summit Sierra Mall management loves these films because it gives their tenants badly needed solar and sun damage control without detracting from the architectural appearance of the mall. Its a win-win all around and Sierra Window Tinting is the only company that carries the dye-free patented smart films with low reflectivity and high heat rejection.

If you would like to see a sample give us a call. Estimates are always free and there is never any hassle or pressure to buy… we just do not operate that way!