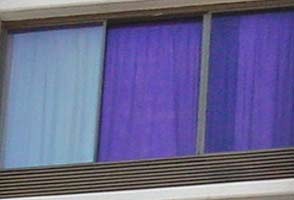 Not all window films are created equal. Many films contain unstable dyes that will fade to purple as seen here.

Buyer beware – a good deal or a flashy warranty does not guarantee that you are getting what you think you are getting. We align ourselves with the highest quality products that we can get our hands on, and trust us, with over 20 years in this business we have had the opportunity to test just about every window film out there.

What we have found are window films that have very attractive pricing or even well-known brand names, that in time, degrade with exposure to the sun. One example happen years ago on Sixth Street in what used to be the Holiday Inn. A bid request was issued to do the entire building and as expected, companies came from all over to try and get the job including us. Well, we lost the bid to a 3M dealer who went awfully low on his bid to get the job. It turned out that his price was so low that he actually had to walk off the job before it was even half finished! We received a call from the building engineer asking if we could come finish the job but the problem was they wanted to pay us the same price that this company was charging. “If those guys couldn’t afford to do it at that price, how could we?” I said. So we lost the job… again.

Here’s what it turned out to look like several years later (See Fig:1.1). Obviously, the film looked much different when it was installed. You aren’t the only one that was surprised, the building management was so surprised and upset that they fired the building engineer in charge of hiring the contractor. We tried to warn them clear back during the bidding that a cheaper price does not guarantee a quality product but sadly no one would listen. The building has since been re-tinted but it is a fitting reminder that consumers need to research thoroughly and not make their purchasing decisions solely on price.

Sierra Window Tinting goes to great lengths to make sure that what we sell is the best quality. One of the things that we do is make sure that our suppliers do accelerate testing of their products. Our Hüper Optik distributor just published an article on how their window films are tested in environmental chambers designed to simulate decades of exposure. It might be a little technical but to summarize, the article shows how poorly constructed window films actually lose their ability to perform over time. It is not too different from what is happening in the illustration in Fig:1.1 Basically, cheap films will lose their ability to filter out UV, visible light, and infrared radiation. All of these three things contribute to heat gain. So if a film begins to get lighter or allow more light to transmit through your window, then you are going to get an increase in heat coming through your window. The same holds true with the infrared (IR), if the material that filters infrared energy starts to fail, you will see an increase in heat.

None of this is good news and you certainly wouldn’t want to find this out after you have purchased a film that you thought was good deal or a film that had a recognizable name brand. This is why we go to such great lengths to make sure we are carrying the best performing films money can buy. They may in some cases be more expensive, but in the long run it is well worth it. So before you purchase window film, ask questions, you can even use our handy chart with tips on how to buy window film.

If you ever have a question about window film and how one film compare to another, contact us and we’ll be happy to act as a resource in this regard so that you can make an educated buying decision.