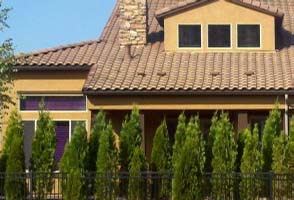 Oh man, this one just breaks our hearts. We have tinted a lot of homes up in Belserra but every once in a while we’ll lose a bid to our competition. Try as we may to educate consumers about “good window tint deals” sometimes consumers are lured by a seemingly low price from the local hack competing company. And here is the result… a million dollar home + bargain window tint= a sad result for the consumer and a black eye for the window film industry. Let’s break down what happened here and hopefully we can provide some useful information about window film that will help to prevent prevent this type of situation from marring our local neighborhoods.

Just a quick story first… we had heard that one of our competitors in town likes to tell customers that “all window films do the same thing…” His statement implies that every window film will reject heat, light, and UV rays, and they are all created equal and will have equal life cycles. If this were true, then why did the window film on this home turn purple after two years? Sierra Window Tinting has installed films on homes in the Truckee Meadows that are over 20 years old and they look the same as the day we installed them! To tell a consumer that “all window films do the same thing” is like saying all cars do the same thing. Sure most cars can get you from point A to point B but that is where the simile stops. Would you rather invest in a Pinto or a Honda? Come on they are both the same thing, they are cars!

Obviously one is built better and designed to last longer than the other. In the long run, one car will provide years of lasting service, it will perform better, it will be more reliable, and it is the better value overall. The same is true with window films.

Like many other products, window film is composed of different components of varying qualities. Dyes, metals, ceramics, and adhesives are deposited onto layers of polyester and to the consumer it may seem as though all of this stuff is the same. Well, this is simply not true. There are different types of window films and they all vary in quality.

Once you have found the proper type of window film, now you need to worry whether it is made of good quality components or not. Typically, you get what you pay for so an abnormally low price is indicative of a low quality film. That said, there are some higher end films that contain dyes and optical deficiencies such as color shift. The best thing to do is to start asking questions. At Sierra Window Tinting our desire is to give you the best window film education you can get anywhere. We feel that learning is essential to good decision making and to that end we have created a “before you buy” sheet with some practical tips for purchasing window film. Use this tool along with our blog to educate yourself so that you don’t fall victim to the same fate as the homeowner in our illustration. As always, we are happy to come and give you a free estimate along with samples. What we never do though, is mislead or pressure you into making a decision. Better to teach and inform, if we do this then we believe that you will ultimately make the right choice.