Historically, most window films have provided only a summer solution – a solution for only part of the year. According to the US Department of Energy, in areas such as Northern Nevada, Reno, Sparks, Lake Tahoe, Truckee, and Mammoth the cooling demand is high and this necessitates that buildings have windows with high insulating U values. Unfortunately, according to the DOE, over 70% of exisiting glass is ineffcient, that means that large amounts of money is being waste on heating and cooling buildings.

Window Film -The most effective solution with the Highest ROI

Most window replacements cost are foar too high to deliver a reasonable rutern on investment (ROI). This is where and aftermarket window film solution can yield a tremendous return on your investment. Most films reject incoming solar energy, but EnerLogic is different.

It works year round – like other major energy saving measures such as high-efficiency lighting, new control systems, and HVAC upgrades.

In summer, EnerLogic keeps the heat out, like traditional reflective window film. But in winter, EnerLogic does what reflective film can’t do: It locks the heat inside. So you get a perfect balance of energy efficiency, comfort, and cost savings – all year long.

And EnerLogic does this with outstanding optical clarity that’s fully compatible with high-efficiency lighting. It looks great in any light.

How Does EnerLogic upgrade windows?

To get such improvement in performance from a thin, transparent window film is impressive – and much more affordable than window replacement.

How does EnerLogic compare to other film technologies?

EnerLogic provides unparalleled glass insulating capabilities – no other low E window film even comes close, not 3M low E, not Llumar low E, not Solar Gard low E, none of them are remotely close to the emmisivity value of Enerlogic. With its patent-pending low-e technology, EnerLogic has the best insulating performance of any window film available. 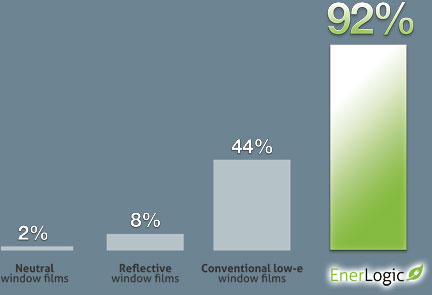 How Does EnerLogic Work?

EnerLogic’s patent pending low-e coating redirects solar and radiant energy back to their source… for energy savings in every season!

When professionally applied to the inside surface of your existing windows as a microthin, ultra-powerful low-e window film, EnerLogic adds as much as 92 percent more insulating power to your window glass.