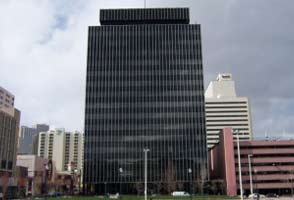 One of the larger buildings in downtown Reno is the large black Wells Fargo Building (Formerly FIB) next to the Cal Neva. It has a massive South exposure and the original glass only rejected 15% of the sun’s solar energy. That translated to massive cooling demands placed on the building’s mechanical equipment and ultimately, high energy bills. Sierra Window Tinting was called in over 12 years ago to do an energy audit an come up with a “return on investment” (ROI) for the building management group that was operating this property at the time.

We always aim on the conservative side and in this case “conservatively” it was a two year ROI that we calculated. The client hired us and we go to work right away. The project went fairly slow due to scheduling and access issues with the building tenants. Sierra Window Tinting has developed a system of scheduling that allows most tenants to go about their day to day operations without interruption. Well, to our surprise the building owners were actually saving enough money in electrical costs each month to pay for and entire floor’s worth of window tinting. If memory serves me correctly, that building is 17 stories tall, so instead of a 24 month ROI, they actually realized a 17 month ROI!

A odd thing happened on the very last day that we were finishing this project. We actually installed this building from the top floor down and we were working on the last office in the mezzanine level when the bank in the lower lobby was held up. The bank robber placed a bag on the teller’s counter and said there was a bomb inside and demanded money. He subsequently left with an undisclosed amount of cash but he didn’t take his bomb with him. So the entire building had to be evacuated which was quite an event. Of course we had to leave all of our equipment and could not get back into the building until a day later. No one was hurt, no explosions, and I think they eventually caught the robber… it’s just one of many of the odd experiences we have had in over two decades of tinting everything from bank buildings to cruise ships. All in a day’s work!

Sierra Window Tinting has installed window film on most of downtown Reno’s high rise buildings. We are the largest window tinting company in Northern Nevada and we specialize in building information modeling so that you can determine your savings before any window film is ever installed on your building. We strongly feel that accurate and relevant data up front allows you to make the best purchasing decisions possible. Call us to learn how we can assist in providing a US Department of Energy recognized building model for your property.